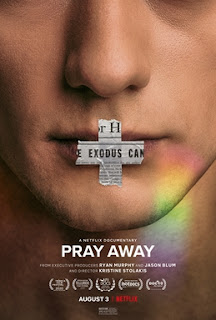 Pray Away (2021) is a new film that reveals personal and political impact of anti-gay ‘conversion therapy’. The film had its world premiere at the Tribeca Film Festival on June 16, 2021.

In it, repentant former leaders of the disbanded US group Exodus International, founded in 1976, which promoted so-called ‘conversion therapy’ in order to change people’s sexual orientation or gender identity, share their painful experiences.

The documentary, directed by Kristine Stolakis and released globally by Netflix, combines archival footage with present-day narration. It includes interviews with four former Exodus leaders, who reflect on the deep wounds that ‘conversion therapy’ left in them and in others. All have renounced their past and are now living openly as bisexual or gay people.

It also reveals the political influence of Exodus and similar organisations. Working with conservative allies in government, they took their agenda to Washington to try and block initiatives such as same-sex marriage. Exodus disbanded in 2013, when Alan Chambers, the group's president, publicly admitted that homosexuality could not be "cured.”

However, its promotion of ‘conversion therapy’ continued outside the US through Exodus Global Alliance, which was headquartered in Canada until two months ago, when the group closed down in anticipation of a new Canadian bill that makes its activities a criminal offence. Exodus still has a foothold in Latin America, with offices in Brazil and Mexico.