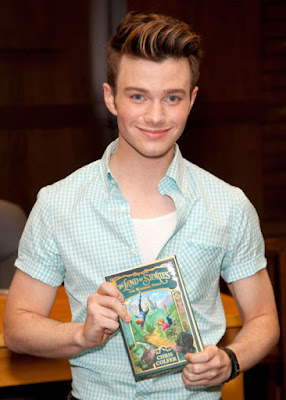 Chris Colfer is an American author, actor, and singer. Born in 1990, in California, he is best known for his character in the popular musical TV series, Glee, where he appeared as Kurt Hummel from 2009 to 2015.

His talent was acknowledged by the critics, winning him a Golden Globe award for Best Supporting Actor in a Series in 2011. In fact, the role of Kurt was specifically created for him; he auditioned for another role that had already been cast, but the producer was so impressed with him he decided to create a character to be able to have him on the show.

His interest in writing started at a very early age, and was spurred on by his Grandmother. As a child, he wrote fairy-tale inspired stories which would serve as an outline for his New York Times Bestseller series Land of Stories.

In 2011, while he was still on Glee, Chris signed a book deal to write two novels for children. His first book The Land of Stories: The Wishing Spell was published in 2012 and became number one on the New York Times bestseller list for two weeks.

Ever since then, Chris has written four more books in The Land of Stories series with great success. In 2017, it was announced that he would be making his directorial debut and would also executive produce the film adaption of his novel The Land of Stories: The Wishing Spell.

After Glee ended in 2015, Chris went on to star in the 2016 movie Absolutely Fabulous as well as guest-starring on TV shows like Julie's Greenroom and Ru Paul's Drag Race: All Stars.

The talented guy is currently working on a TV pilot, adapting the book The Leftover Witch for Disney, which he will also produce.

Watch and enjoy some Chris performances in Glee: