A rave pride in support of LGBT rights in Kyiv, Ukraine 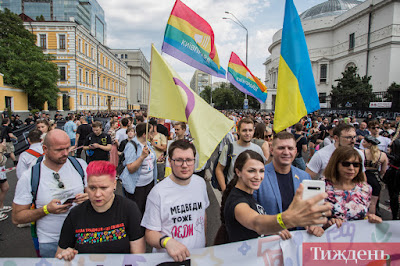 This year, Ukrainian LGBT activists have decided to do Pride a little differently. They did drag their speakers and turntables across Kyiv to stage a huge rave outside the office of Volodymyr Zelensky, the president of Ukraine.

A rave for LGBT rights directly outside the President’s office. However, there was a confrontation between police and demonstrators rallying against the LGBT pride event took place outside the Office

This event comes just days after a successful Pride march supported by Amnesty Ukraine, which took place in the president’s hometown, Kryvyi Rih, with thousands of participants.

Despite alluding to progressive policies in his presidential campaign, advancements in LGBT rights haven’t moved forward as quickly as expected. As it stands, activists don’t exactly have hope that president Zelensky is working towards these goals.

The first gay Pride event in Kyiv took place in 2016 and only a couple of thousand people attended. The number of attendees doubled a couple of years later. Although Kyiv held its largest-ever Pride parade in 2019, an event in Odessa, a port city in southern Ukraine, was last year targeted by far-right thugs, who pelted attendees with eggs and attacked them with pepper spray. 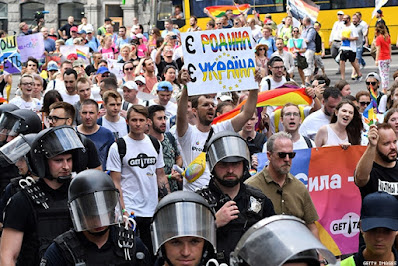 Ukrainian police has to protect marchers to ensure order