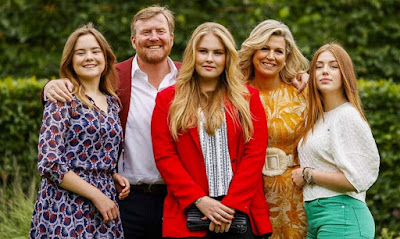 Dutch Prime Minister Mark Rutte has made clear any king or queen could also marry a person of the same sex. Mr Rutte said it was all about "theoretical situations" but the next queen could marry a woman.

"Therefore the cabinet does not see that an heir to the throne or the king should abdicate if he or she would like to marry a partner of the same sex," he explained in a response to a written question in parliament from his own party.

The heir to the Dutch throne, Princess Amalia, turns 18 in December. Her future has come under scrutiny, with one book over the summer raising the issue of what might happen if she chose to marry a same-sex partner.

Rutte was responding to questions from parliament that arose from that book which argued that old laws in the Netherlands could exclude the possibility of a same-sex couple on the Dutch throne.

Same-sex marriage has been legal in the Netherlands since 2001. The engagement of a royal family member is announced by his or her parents after which the Dutch parliament is asked to grant their approval to the marriage, but it seems that same-sex marriage would not bar Amalia to become queen.