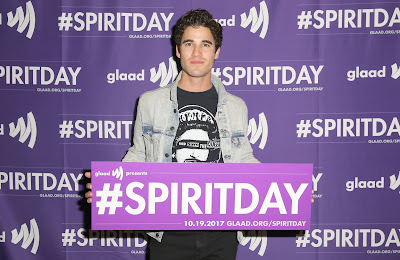 Spirit Day is an annual celebration in which millions of people around the world show their support for LGBT youths and stand up against bullying by wearing purple, the "spirit" color of the rainbow Pride flag on the third Thursday of October.

Brittany McMillan, of Canada, launched the yearly tradition in 2010 after she read on Tumblr about nearly a dozen LGBT youths who died by suicide that September, she said.

"At the time, I would have been 15 or 14, and some of the kids that were committing suicide were even younger than that, and that was hard to see," said McMillan, an elementary school teacher. "So, I just wanted to spread awareness and say: 'This isn't OK.'"

With the backing of the LGBT advocacy group GLAAD, McMillan launched the first Spirit Day on Oct. 20, 2010.

Since then, Spirit Day has become a global phenomenon, with celebrities coming out against the bullying of LGBT kids, which remains pervasive around the world.

A study this year by the Trevor Project, an LGBT youth suicide prevention and crisis intervention organization, found that more than 52 percent of LGBT middle and high schoolers report having been bullied in person or online.

There is still a lot of work to be done. Be purple the whole year!