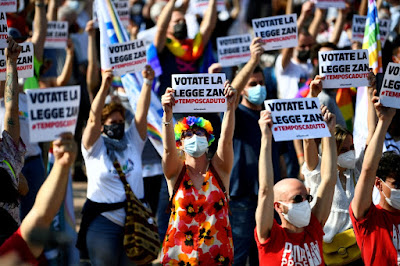 Italian senators have voted down a bill that would have protected LGBT people against discrimination.

The bill would have meant hate crimes against LGBT people would be criminalised, as well as against women and minorities such as people with disabilities. But it was defeated in the Italian parliament by 154 votes to 131.

They voted to block the debate on the law, named after the gay centre-left Democratic party (PD) legislator Alessandro Zan and previously approved by the lower house of parliament in the face of months of protests from far-right and Catholic groups.

Opponents of the law, such as the right-wing parties the Northern League and the Brothers of Italy, argued the law would have inhibited free speech and promoted a "homosexual propaganda."

Attempts by various governments over the past three decades to enact a similar law have either been stifled or sabotaged, with any progress or even just meaningful debate stymied by a macho culture, Catholicism and support for far-right parties.