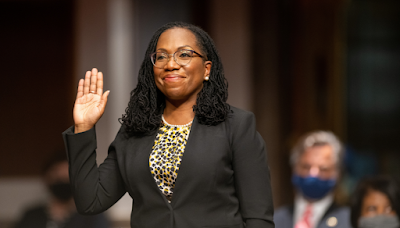 The U.S. Senate confirmed Judge Ketanji Brown Jackson to the Supreme Court, promoting the appellate judge, nominated by President Biden, to a lifetime seat no Black woman has ever occupied.

Jackson, 51, becomes only the sixth woman and third Black justice to ascend to the high court, which will for the first time have two Black members, three members of color and four women.

The final vote was 53-47, with all 50 Democratic caucus members supporting Jackson, joined by Republican Sens. Susan Collins of Maine; Lisa Murkowski of Alaska; and Mitt Romney of Utah.

In a symbolic moment, Vice President Kamala Harris, the first Black woman elected to her job, presided over the vote. “On this vote, the ‘yeas’ are 53, the ‘nays’ are 47, and this nomination is confirmed,” Harris announced with a large smile after the final vote was cast.

Democrats on the Senate floor greeted the veep’s announcement with a standing ovation, which was joined on the GOP side only by Romney.

The vote means Jackson will take office at the end of the court's current term — likely in June or July — when Justice Stephen Breyer is expected to step down. Her appointment would not disrupt the current 6-3 conservative balance on the Supreme Court. 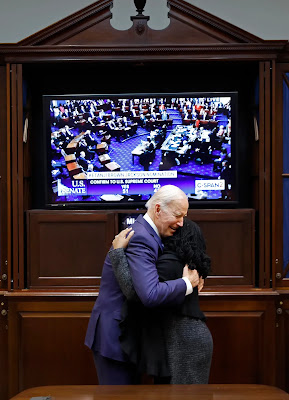