'Take Me Out' backs to Broadway 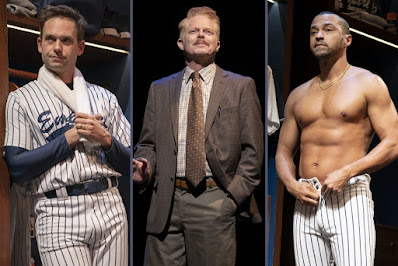 Take Me Out is a play by American playwright Richard Greenberg. It made its Broadway debut on February 27, 2003 at the Walter Kerr Theatre, where it ran for 355 performances and won the 2003 Tony Award for Best Play.

At the time of the writing of this play no Major League Baseball player had ever come out to the public during his career. That remains the case 20 years later, although a growing number of professional athletes in other sports have cracked open the closet door. This play is the dramatic exploration of what such an event might be like.

When Darren Lemming, the star center fielder for the Empires, comes out of the closet, the reception off the field reveals a barrage of long-held unspoken prejudices. Facing some hostile teammates and fraught friendships, Darren is forced to contend with the challenges of being a gay person of color within the confines of a classic American institution. As the Empires struggle to rally toward a championship season, the players and their fans begin to question tradition, their loyalties, and the price of victory.

Now, a Broadway revival, directed by Scott Ellis, opened at the Hayes Theater on April 4, 2022. It was originally scheduled to open on April 23, 2020. However, due to the COVID-19 pandemic, the show suspended production. The cast is made up of Jesse Williams, Jesse Tyler Ferguson and Patrick J. Adams.

What Take Me Out does right is highlight how sportsmen, entrenched in a business that boasts the traditional expectations of masculinity, respond to a team member’s homosexuality. The reactions move from open support to microaggressions to downright hostility. Slow to bat, this play’s second act serves as its home run. Inside the team showers, beautifully crafted by David Rockwell, a place of vulnerability (and nudity) marks the show’s most memorable turning point.