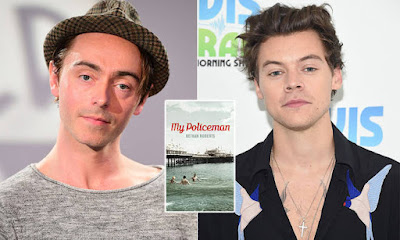 My Policeman is a romantic drama film directed by Michael Grandage. A take on the 2012 novel of the same name by author Bethan Roberts. It stars Harry Styles, Emma Corrin, and David Dawson.

The film tells the emotional, dramatic story of an English love triangle during a time when queerness was criminalized

Harry Styles stars as a bi policeman named Tom Burgess who marries Marion, played by Emma Corrin, after she falls in love when he teaches her to swim at Brighton beach.

Tom also falling in love with Patrick, played by David Dawson, in a time when same-sex relationships were still illegal.

The film then catches up with the married couple a few decades later when Tom’s former lover re-enters their life.

Three older actors have also been cast to play Marion, Tom and Patrick in the 90s: Gina McKee as an older Marion, Linus Roache as an older Tom, and Rupert Everett as an older Patrick.

Watch a trailer below: