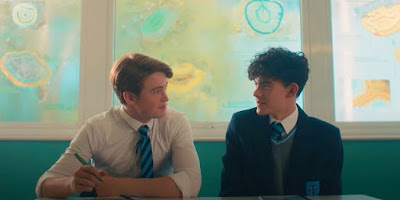 Heartstopper is about Charlie, an openly gay anxious boy, and Nick, a kind-hearted rugby player. They both go to the same British all-boys school and when they meet, they immediately have a connection and become friends.

Before being the new sensation of TV series, it was also a successful comic created by Alicce Oseman in 2016. After three years and 1 million books sold, there was talk of a television adaptation, but Covid pandemic delayed the release until 2022.

The main roles in TV show are played by Joe Locke (Charlie) and Kit Connor (Nick) but, beyond them, the show get a look at their friend groups and classmates, and how they react to the two hanging out with each other, some of them accepting but other directly bullying. Any way, Heartstopper creators wanted to show queer teens that the future can be bright.

The series has received critical acclaim. It shows an inclusive romance and open-armed embrace for queer youth, which lays the strong foundations of what you can only hope will be the uplifting and inclusive depictions of queer characters for the next generation of viewers.