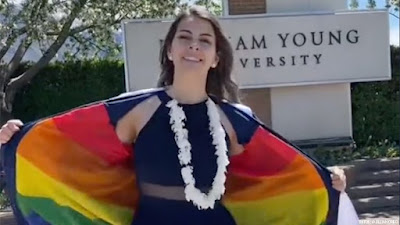 Jillian Orr, 28, majored in psychology at BYU in Utah, which is owned by the Church of Jesus Christ of Latter Day Saints (LDS), commonly known as the Mormon church.

The university has strict anti-LGBTQ policies enshrined in its Honor Code, which students can be expelled for breaking. For example, requiring that they “live a chaste and virtuous life, including abstaining from any sexual relations outside a marriage between a man and a woman”, and even banning “same-sex romantic behaviour” because it does not “lead to eternal marriage”.

Half-way through her course Jillian, who was raised Mormon, realised that she was bisexual. However, she decided to stay because of the low tuition fees, well-respected psychology department, and the fact that her credits for BYU’s many required Mormon religion classes would not be transferrable to another university.

Jillian wrote after the ceremony: "At BYU it’s against the Honor Code to be in a homosexual relationship. If you are discovered to be dating or just holding hands there are severe consequences. They threaten to take away your degree and kick you out of the university. Students are afraid to be who they are, so they hide out of fear until they get out. I will not hide. I will be seen. In front of the entire school.” 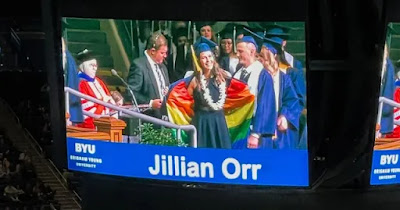 Jillian in front of the entire school