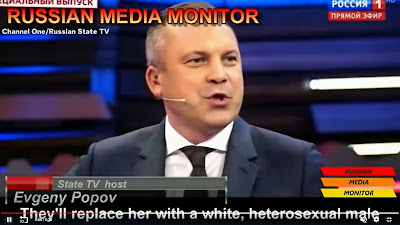 The TV hosts used footage of Jean-Pierre at her first press conference to mock her. They continued with a racist and sexist rant on the state-owned Russian television channel 1.

The Kremlin propagandists on Russian state TV claimed Jean-Pierre was not chosen for her professional abilities and said that she only got the job because she is a dark-skinned immigrant.

They laughed as they said Jean-Pierre will be replaced in a month or two by a white, heterosexual male.

Jean-Pierre has become the first black, openly gay White House press secretary. She was born in Fort-de-France, Martinique and is the daughter of Haitian parents. Her family moved to New York City when she was five.

Addressing her historic position in her first press briefing, Jean-Pierre said: "I am obviously acutely aware that my presence at this podium represents a few firsts. I am a black gay immigrant woman, the first of all three of those to hold this position. I would not be here today if it were not for generations of barrier-breaking people before me. I stand on their shoulders." 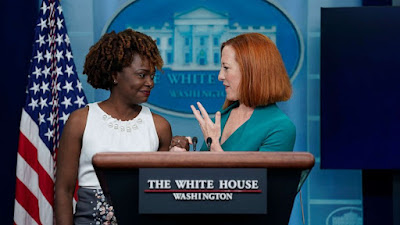 Jean-Pierre and Psaki at the White House press room