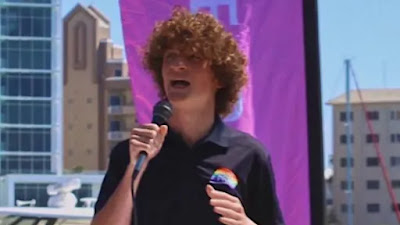 Zander Moricz, 18, is the senior class president at Pine View School in Florida's Sarasota County. He's set to speak at his upcoming high school graduation, but Moricz claims his principal and school administration officials are trying to preemptively silence him and censor his speech.

Moricz is also one of the plaintiffs named in a lawsuit against the State of Florida relating to its recently signed Parental Rights in Education law, or what critics have dubbed the "Don't Say Gay" law.

"A few days ago, my principal called me into his office and informed me that if my graduation speech referenced my activism or role as a plaintiff in the lawsuit, school administration had a signal to cut off my microphone, end my speech, and halt the ceremony," wrote Moricz on Twitter. "I am the first openly-gay Class President in my school’s history, this censorship seems to show that they want me to be the last."

Moricz opted for a hair metaphor after he says faculty members threatened to censor his graduation speech if he spoke about his LGBTQ activism or experiences as a gay teen. So, when Moricz delivered his speech at Pine View’s graduation ceremony, he shared quips about his curly hair as euphemisms for being gay.

“I used to hate my curls,” he said in the speech, which can be viewed in full here. “I spent mornings and nights embarrassed of them, trying to desperately straighten this part of who I am. But the daily damage of trying to fix myself became too much to endure.”

“There are going to be so many kids with curly hair who need a community like Pine View and they will not have one,” Moricz continued. “Instead, they’ll try to fix themselves so that they can exist in Florida’s humid climate.”

Watch the speech below: