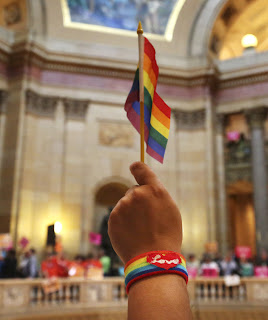 Minnesota has become the 13th state in U.S. to legalize same-sex marriage. The bill passed Senate vote with 37 votes to 30 in favor to marriage equality.

On May 9, 2013, the Minnesota House already passed this bill on a vote of 75 to 59. Tomorrow, Gov. Mark Dayton finally signed the new law, although the first weddings would be August 1, when this law will take effect.

Minnesota has joined Iowa as the only other Midwestern state to permit gay marriage and the first to do so through legislation. Iowa allowed same-sex marriage since 2009 under a state Supreme Court order.

After Delaware Rhode Island and Minnesota, the next match will be played in Illinios where is expected the bill passes in the House too after state senators approved the bill in February.