Ted Chalfen, a Colorado gay teen, started his graduation speech thanking his classmates for their support. Loud and clear, he addressed to the crowd firmly and proud: "I’m going to skip all of the cliches. I want to rattle off right now, and get right to the point - I’m gay", he said.

Ted admitted that he was prepared to "endure taunting, social ostracization and even physical abuse" when he came out before entering high school, but "The response I have received, by and large, has been stunning. The amount of people who actually seemed happy to hear that I was gay outnumbered those who didn't care, and those who didn't care far outnumbered the small group who reacted negatively", he added.

Finally, he recognized "The kindness and understanding that you all have shown me over the past four years speaks volumes about each and every one of you as human beings". 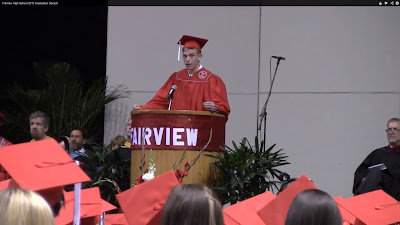