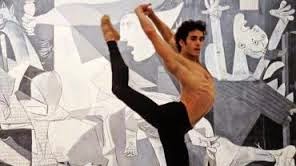 Pablo Picasso's anti-civil war masterpiece "Guernica", one of the world's most iconic paintings, served as a backdrop to a dance performance for the first time.

About 80 people sat on the floor or stood as Josue Ullate, a bare chested dancer in black tights, jumped and leapt in front of the large black-and-white canvas at Madrid's Reina Sofia Museum.

It took organisers over a year of talks to get permission of Ullate to perform in front of the painting, which used images of distorted figures -- human and animal -- to represent the horrors of war.

Picasso created "Guernica" as a commission for Spain's Republican government to represent the country at the 1937 World Fair in Paris, as Spain writhed in a bloody civil war started by future dictator General Francisco Franco.

The painting was transferred to Madrid in 1981 from New York's Museum of Modern Art, where it had been deposited on a long-term loan by Picasso until democracy was restored in Spain.

Currently, this painting is one of the most visited places in Spain.