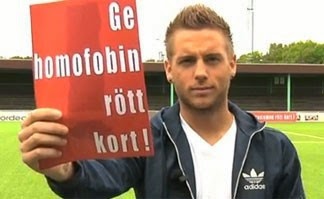 Anton Hysén (1990) is an English born, Swedish footballer who plays in the National Premier Soccer League for Myrtle Beach FC. He is a former member of the Swedish national under-17 association football team.

Hysén came out as gay to the Swedish football magazine Offside in March 2011. He scored one for equality in sports when he kicked down the closet door three years ago and revealed he was gay.

Hysén continues to blaze a trail in U.S. soccer started by Robbie Rogers, who made history last May when he became the first openly gay major league soccer player by signing with the Los Angeles Galaxy.