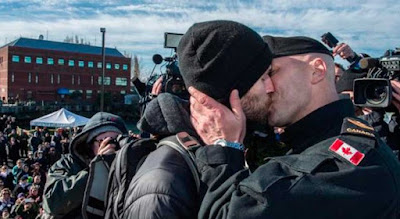 Master Seaman Francis Legare had been out to sea for eight long months on the HMCS Winnipeg (Royal Canadian Navy) which returned to Victoria (British Columbia) on Tuesday.

Legare had randomly won the ceremonial first welcome home kiss and since he is gay, his kiss was with his partner Corey Vautour.

It is believed to be the first time the ceremonial kiss was between two men. It was also a historic one for the Canadian Navy.