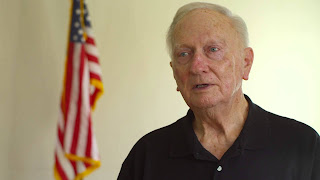 Gay veteran Don Hallman has finally received an honorable discharge from the U.S. Army 61 years after he was kicked out for being gay.

Hallman joined the military in 1953 because, he says, “I wanted to serve my country”.

He was dishonorably discharged in 1955 while serving in Frankfurt, Germany after he began talking with with a young man on a sidewalk. Before the pair could do anything, police moved in on him. Hallman believes his arrest was part of a sting operation.

After that, Hallman says, “I was on an airplane back to New York and discharged almost immediately. Just bang, bang, bang… no explanation, no conversation, no nothing”.

Following President Obama’s repeal of Don’t Ask, Don’t Tell in 2010, Hallman sought to have his discharge record changed from dishonorable to honorable. Hallman appealed to the Army Review Board in June.

Brown says an estimated 100,000 Americans have been discharged from the military because of their sexual orientation since World War II and often lost benefits they had earned.