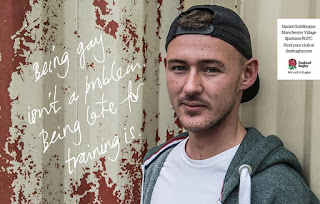 England Rugby has launched We Call it Rugby, a national campaign to grow participation and engagement amongst young players, and challenge stereotypes about the sport.

In a series of short videos, players tell the stories of how rugby plays a significant role in their lives. One of the five short films focuses on Manchester Village Spartans RUFC, a predominantly gay rugby union team formed in 1999.

The short film focusses on existing players, Dean Bee (Captain), Robbie Stone (Prop) and Gareth Longley (Centre) as well as new recruit, Daniel Goldthorpe who had never player rugby before joining the team. “Being gay isn’t a problem. Being late for training is”, said Goldthorpe.

It follows the guys both on and off the pitch, with a large part of the filming taking place at Manchester Pride 2015, where the team marched in the parade in full Spartan outfits.