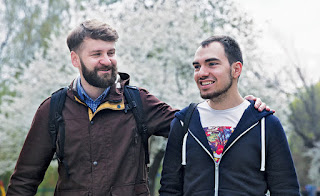 Ukraine has seen its first gay marriage despite the fact that such unions are not yet recognized by the state.

Tymur Levchuk and Zoryan Kis held a marriage ceremony in Kiev, deciding they wouldn’t wait for the government or their families to codify and accept their relationship. The couple decided to marry after being in a relationship for four years.

“It was a romantic evening”, said Kis. “I felt like we are alone in the world, so I proposed to Tymur, and he said yes”.

The official name for their wedding is a commitment ceremony. But someday their union will be recognized by Ukrainian society, Kis and Levchuk believe.

Both are passionate activists who fight not only for equal rights for lesbian-gay-bisexual-transgender people, but also against discrimination in Ukraine.

Read more about the situation of LGBT people in Ukraine here.