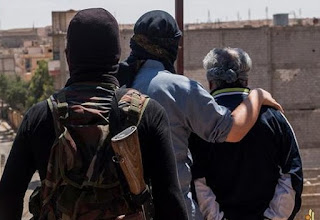 ISIS has released a horrifying new propaganda video that apparently depicts the precise moment a gay man is thrown off the roof. The footage is quickly followed by another man’s beheading.

The monstrous footage was reportedly released by the terror group under the title “The Voice of Virtue in Deterring Hell.”

The clip consists of a series of jarring scenes, including a man being thrown from a building and then pelted with stones, all because he is allegedly gay.

The next scene features a blindfolded man kneeling on the floor about to be beheaded, and another prisoner with his arms slung across a table as militants get ready to cut off his hands.

The terrorist group, which operates predominantly across Syria and Iraq, is notorious for filming videos in which captives, usually Westerners or opposing fighters besides homosexuals, are cruelly slaughtered.