The Simpsons bawl Donald Trump out 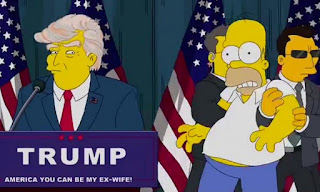 The Simpsons interrupted their summer vacation by posting a two-minute campaign ad that asks Springfield residents whether they would rather have Hillary Clinton or Donald Trump in the White House during a national crisis.

"It's 3 a.m. and the phone's ringing in the White House. Who do you want answering that call", commercial asks Springfield residents

While The Simpsons don’t flatly state “I’m With Her”, they’re extremely critical of Clinton’s opponent. This isn't the first time The Simpsons mocked Trump this campaign season.