Atlanta's rainbow crosswalks will be permanent 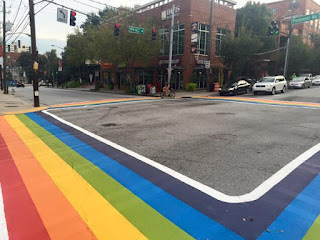 The city of Atlanta, Georgia, has decided to show their pride permanently.

During Atlanta Pride Week in 2015, a rainbow crosswalk was temporarily installed on the intersection of Piedmont Avenue and 10th Street, an area that is known as a hub for the city’s LGBT community.

In May, more than 20,000 people signed a petition in support of the crosswalks being a year-round addition to the neighborhood.

In a release, Reed said: “For the past year, Atlanta has grieved alongside Orlando. Our city has rallied around our LGBT community, and we have not shied from demonstrating our unity and solidarity. And with this spirit, I cannot think of a more important time to reaffirm our unwavering and unqualified support for our LGBT residents”.

It is more than a painting, it signifies that the LGBT community is a visible part of the city of Atlanta.