Chair of Amnesty International Turkey swept up in post-coup purge 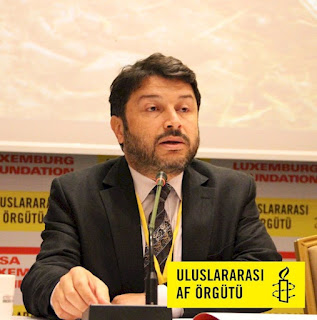 Taner Kiliç, the chairman of Amnesty International Turkey’s board, was detained along with 22 other lawyers as part of an investigation into Turkey’s Gülen group. Detainees are accused of using a smartphone application called “ByLock”.

ByLock is considered by Turkish authorities to be the top communication tool among followers of the Gülen movement, which is accused by the government of masterminding a failed coup attempt on July 15, 2016.

Turkey survived a military coup attempt on July 15 that killed over 240 people and wounded more than a thousand others. Immediately after the putsch, the Justice and Development Party (AKP) government along with President Recep Tayyip Erdoğan pinned the blame on the Gülen group. The group denies any involvement.

Tens of thousands of civil servants, police officers and businessmen have either been dismissed or arrested for using ByLock since a failed coup attempt last July.

Salil Shetty, Amnesty International’s Secretary General, said: "The fact that Turkey’s post-coup purge has now dragged the Chair of Amnesty International Turkey into its web is further proof of just how far it has gone and just how arbitrary it has become. Taner Kiliç has a long and distinguished record of defending exactly the kind of freedoms that the Turkish authorities are now intent on trampling".

"In the absence of credible and admissible evidence of their involvement in internationally recognized crimes, we are calling on the Turkish authorities to immediately release Taner Kiliç along with the other 22 lawyers, and drop all charges against them", he added.