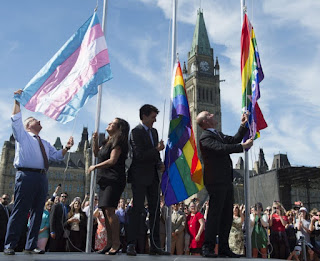 The Liberal government will introduce legislation later this year to erase past convictions for sexual activity with a same-sex partner, Prime Minister Justin Trudeau announced as multi-coloured flags were raised on Parliament’s west lawn.

The legislation would add to reforms already in the works to atone for the damage caused to thousands of Canadians convicted of gross indecency for committing homosexual acts.

Egale, a national organization that advocates for the rights of sexual minorities, handed the government a report last June that recommended those convictions be expunged, pardoned or somehow stricken from the records of those convicted. Before 1969, same-sex acts between consensual adults were considered unlawful.

“Our government will be moving forward with a process for the expungement of criminal convictions for Canadians who were unjustly convicted of a crime simply for who they were and who they loved”, Trudeau said as dozens of people gathered for the announcement cheered.

A new step in Canada to achieve full equality.