Sesame Street team tweeted one image supporting LGBT Pride Month to their nearly two million followers with the words: "Sesame Street is proud to support families of all shapes, sizes, and colors".

Throughout the almost 50 years that Sesame Street has been on television, the show has not shied away from sensitive and tough subjects. Characters on the show openly discussed death when one of the actors portraying a main character died, back in 1982. Since then, episodes have covered topics like HIV, divorce, incarceration and racism.

Most recently, Sesame Street introduced a new character: a puppet named Julia who has autism. As an educational program on public access TV, the show has the unique opportunity to literally broadcast positive messages to its millions of young viewers, and has been successful in doing so. Children who watch the show learn lessons about tolerance, inclusion and kindness.

It would therefore be reasonable for Sesame Street, a progressive program that is in tune with society and its advancements, to feature gay or lesbian characters. As homosexuality and same-sex marriage have become more mainstream and are no longer things to hide or not talk about, children are exposed to LGBT couples and individuals in their homes and schools. 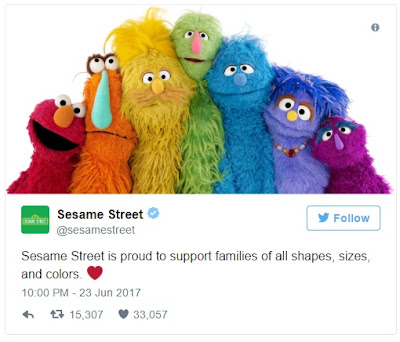