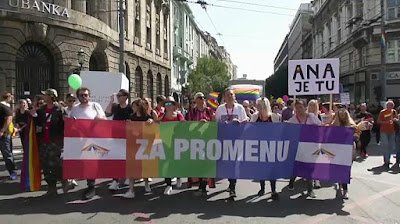 In three previous years, 5,000 policemen were there to protect a few hundred Pride March participants from possible violence. This year, there were more visitors and less policemen, but still the same security measures, the city’s downtown was in lockdown during the three-hour event.

Around 1,000 in total attended, including a few local politicians and MPs, openly lesbian prime minister Ana Brnabic, a few ambassadors, many foreign and local activists, many straight allies.

A small truck with fierce local queen Alex Electra led the colorful crowd through Belgrade city center and ended with a short party on the city’s main square.

The Pride March itself went well, but what is the position of LGBT community and state of human rights in Serbia during the remaining 364 days of the year?

Most of the queer people in Belgrade and Serbia are too scared to attend the Pride March, which is why messages that resonated among guests and speakers included: “We are walking for those who can not join us” and “you are not alone.”

There are almost no publicly out celebrities and many queer people are still struggling with violence and repression on an everyday basis while state institutions and most of the media fail to address the matter.

For years now, the LGBT community in Serbia has hoped to see the government delivering legislative changes helping same-sex couples or transgender individuals, but things haven’t moved much beyond empty promises. Serbian politicians keep repeating how “we have gone a long way” and assuring the public that “the government will respect the rights of all citizens, both the majority and minorities,” like PM Brnabic said ahead of Belgrade’s 4th Pride March. Unfortunately, the reality is different. 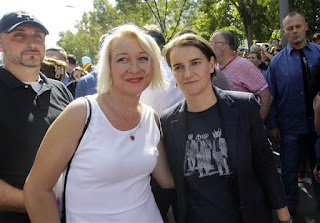