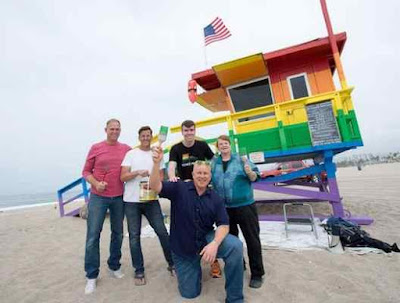 A Venice Beach lifeguard tower gets to keep its gay pride rainbow stripes after the Los Angeles County Board of Supervisors voted unanimously to rescue it from getting repainted to the iconic blue.

“We received 11,000 signatures on a petition from that area, saying no no, we love it, we’d really like to keep it”, said Supervisor Sheila Kuehl, who introduced the motion to let the stripes stand.

The board voted unanimously in support of Kuehl’s motion, which included dedicating the tower in memory of the late Bill Rosendahl, the first openly gay man elected to the Los Angeles City Council. The section of Venice Beach where the lifeguard tower stands also was renamed after him.

The tower, at the end of Brooks Avenue, was wrapped in the rainbow colors of the gay pride flag and dedicated in June. It was meant to be part of a temporary, public art installation to help kick off an LGBT street festival.

The county’s Board of Supervisors voted in March to allow the original tower to be changed. Venice Pride, a local nonprofit organization, and Dunn-Edwards Paints funded the project. But without the board’s approval, the tower would have been repainted to its original iconic blue because the permit for the installation was temporary.