Same-sex kisses on the cover of Vogue Italy 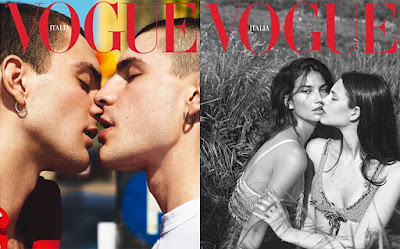 For the male-on-male cover, models Edoardo Velicskov and his real-life boyfriend Pablo Rousson are captured in a steamy close-up, and for the female-on-female cover, models Lily Aldridge and Vittoria Ceretti display an equally intimate black and white moment, surrounded by tall grass.

While you’d think covers such as these are no big deal in the liberal country, renowned worldwide for its reputation of romance and sex, Italy has been a rather late bloomer in LGBT acceptance.

It was only in 2016, that Italy became the last founding country of the European Union to give legal recognition to same-sex civil unions. Italy is also yet to allow same-sex marriage, and has no laws protecting LGBT individuals in the work place or in public.

Other Vogue editions have tried to be more diverse, and to varying levels of success. Vogue Paris’ iconic March issue featured trans model Valentina Sampaio on the cover, and was very popular, however Vogue US suffered a catastrophic fail when they featured Zayn Malik and Gigi Hadid as a ‘gender fluid’ couple on their cover.

Covers such as these from Vogue Italia are exposed on a global platform and do a fantastic job of pushing cultural boundaries worldwide, doing well to spread the message of unconditional love on a significant scale.