NYC march planned to demand action from U.S. government for the LGBT Chechens 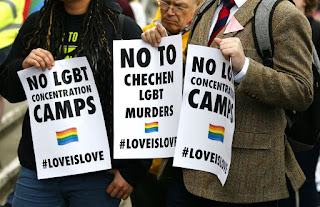 Though the gay purge in Chechnya has fallen to the wayside in favor of fresher headlines for the largest media outlets in the country, gay Chechen men still live their daily lives in fear that they could be abducted and tortured by their own government.

On October 14, 2017, Voices 4 Chechnya, a New York-based group plans to march from the Stonewall Inn to Trump World Tower demanding action in the form of humanitarian parole visas from the U.S. government for the persecuted LGBT Chechens.

“Every day queer Chechens are rounded up, abducted, tortured, and killed. Over 20 Chechens have escaped and are living in safe houses in mainland Russia, with no way out,” the group said in a release.

News of the ghastly situation in Chechnya broke earlier this year when tales of survivors began to leak into the global news stream. When confronted, Chechen president Ramzan Kadyrov denied any sort of government-sponsored program rounding up gay men, because according to him there are no gay men in Chechnya.

Over the summer when a Trump official met with a Russian official, he didn’t even bring up Chechnya during their conversation, citing a lack of time.

“Humanitarian parole visas are essential because, currently, tourist visas are no longer an option,” the group said. “These individuals are hiding from their relatives, and the Chechen and Russian governments, making applying for tourist visas virtually impossible. It is crucial to recognize these people as victims of genocide, and the humanitarian catastrophe currently taking place in Chechnya,” the group added.