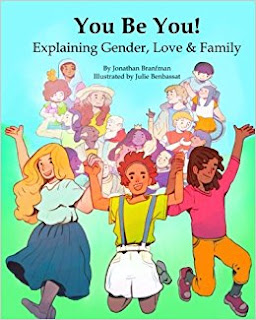 There’s finally a book that explain the complexities of gender and love to children: You Be You! Explaining Gender, Love & Family, by Jon Branfman and illustrated by Julie Benbassat.

"I believe teaching children accurately about gender, sexual orientation, and family at an early age is important for two reasons", Branfman explains.

"First, because kids are already absorbing many harmful, inaccurate beliefs on these subjects from peers, TV, and implicit (or explicit) messages from adults around them. So it’s not a choice between letting kids receive an education about these topics or not. Rather, it’s a choice between proactively educating kids in a way that’s accurate, or passively allowing them to learn all kinds of untrue ideas".

"Second, because social beliefs about gender, sexuality, and family have profound real-world consequences. These ideas shape how children see themselves and others for the rest of their lives: Whether they can accept themselves, whether they treat others well, whether they participate in persecuting others or help to end persecution".

The illustrations are significant too. They break from the conventions of children’s books, that often show only white and able-bodied faces. Julie’s beautiful illustrations feature people of all genders, orientations, colors, ability statuses, and ages, as well as many different religions.

The book is just as informative to adults as it is to children. It really helps them get a handle on these topics.