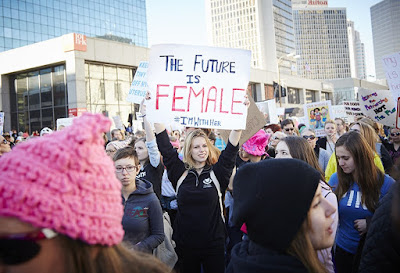 The Women's March was a worldwide protest on January 21, 2017, to advocate legislation and policies regarding human rights and other issues, including women's rights, immigration reform, healthcare reform, reproductive rights, the natural environment, LGBT rights, racial equality, freedom of religion, and workers' rights.

Most of the rallies were aimed at Donald Trump, immediately following his inauguration as President of the United States, largely due to statements that he had made and positions that he had taken which were regarded by many as anti-women or otherwise offensive. It was the largest single-day protest in U.S. history.

One year after, hundreds of thousands of women took to the streets in droves to protest Trump's inauguration, marchers are gathering again in cities across the country and around the world in a sharp rebuke of Trump's presidency and in continuation of a still-growing international movement.

Demonstrators surged into the streets in protests in American cities across the country, with parallel rallies in Europe, Asia and Africa turning the event into a global affair. Authorities estimated that well over 100,000 people attended the New York rally and that some 300,000 showed up in Los Angeles.

This second year of the Women's March also comes in the middle of the #MeToo movement, which has shed light on sexual misconduct and ushered in social change in a bevy of industries. It also comes months ahead of the midterm elections in the United States, in which progressive women hope to turn their activism into victories at the ballot box.

Democratic elected officials and liberal celebrities also urged attendees to channel their energy and frustration with Mr Trump's policies into November's midterm elections, where Democrats hope to wrest back control of Congress, governorships and state legislatures. 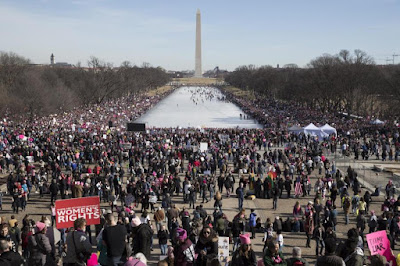