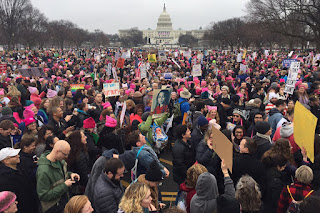 The National Mall in Washington D.C. has flooded with pink, as hundreds of thousands demonstrators descend for the Women's March on Washington.

Just one day after Donald Trump's inauguration, marchers from across the country have gathered in the city to protest his agenda and support for women's rights.

Protesters in the United States and around the world are joining marches Saturday to raise awareness of women's rights and other civil rights they fear could be under threat under Trump's presidency.

"It’s more about women’s rights, human rights", one of the organizers said. "During the campaign there were lots of misogynist, racist and hateful messages, and that’s what we’re standing up against", she added.