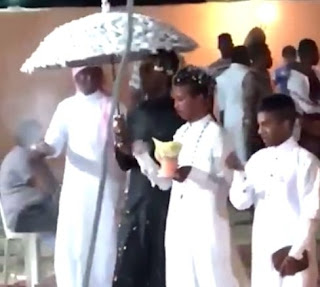 Police in Saudi Arabia say they have arrested several young men who appeared in a video of what was described as a "gay wedding scene".

A video circulated widely online shows two men walking side by side as they are showered in confetti. A long bridal train appears to trail along the ground behind one of the men.

Mecca Police arrested a number of people at the event and their cases had been referred to prosecutors, they added. But they did not name the men or provide details of the charges they faced.

Police said the event had happened at a festival at a resort in the holy city, and had left people present "surprised".

The Kingdom does not have written laws concerning same sex relationships, but Saudi judges use principles of sharia law to sanction people they suspect of having sex with someone of the same gender, according to Human Rights Watch.

Saudi Arabia is among the countries in which consensual same-sex sexual activity remains punishable by death.