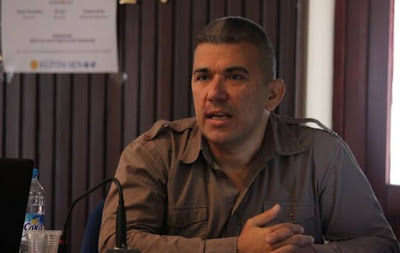 Ali Erol, a prominent Turkish human rights activist and a founder of Kaos GL Association, Turkey's first registered LGBT organization, has been arrested and detained in a home he shares with his partner without charge.

Clear indications of the purpose of his arrest are yet unknown, though Kaos GL has reported that Erol's social media posts were included in the authorities' detention warrant.

Yildiz Tar, Media and Communications Coordinator for Kaos GL, commented: "Us having such little information about the detention of a prominent figure of the LGBT movement and founder of Kaos GL is unlawful and worrying. If you recall, Ankara Governorship banned LGBT events for an indefinite period in November. This detention is an intervention in both freedom of expression and LGBTI rights. We hope this mistake will be corrected."

Turkey did not criminalize homosexuality but it is among several Muslim-majority nations that have led crackdowns on its LGBT citizens in recent years, with the governor of Ankara banning all LGBT-related events in the city, claiming that events like Istanbul Pride will only spark a backlash from conservative elements in the country, which could threaten public safety and security. Under Erol’s leadership, Kaos GL as challenged the ban, claiming it is unconstitutional.

Taner Kiliç, the chairman of Amnesty International Turkey’s board, was also detained after the failed coup attempt on July, 2016.