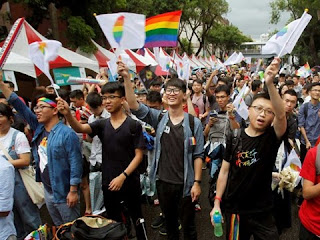 Taiwan LGBT Pride is the largest parade in Asia. Thousands of colorful marchers paraded through the city with rainbow flags.

So many people attend the parade that marchers take three different routes around the city. The event ends with performances and speeches at the President’s Office.

On 24 November, Taiwan’s citizens will head to the polls. They will vote on whether the country should change its Civil Code to redefine marriage as between two people (rather than a man and a woman) or enact separate legislation to allow same-sex unions.