In Europe, same-sex marriage has become increasingly accepted since the Netherlands became the first country in the world to legalise gay weddings in 2001.

Fourteen other countries in Europe so far have followed the Dutch lead, most of them are on the western side of the continent and are part of the European Union, where 23 out of 28 member states recognise some type of same-sex union.

Austria was the latest European country to legalise same-sex marriage following a Constitutional Court decision in 2017, which will come into effect in January 2019.

A further nine European nations include some type of civil union between same-sex couples in their laws.

Two countries, Armenia, which has a ban on gay marriage, and Estonia, have not legalised equal marriage but legally recognise same-sex ceremonies performed in other countries.

Some ten countries, including Romania, do not recognise same-sex unions at all, while an additional fourteen have a constitutional ban on equal marriage.


European countries with some form of civil union:


The nations where equal marriage is still illegal


European countries with a constitutional ban on equal marriage: 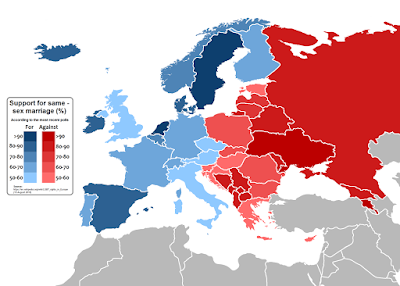