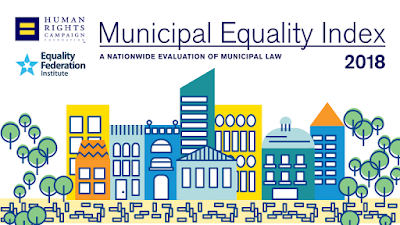 A record number of 78 municipalities earned perfect scores for advancing inclusive policies in 2018, according to a report released by the Human Rights Campaign Foundation and the Equality Federation Institute, two LGBT advocacy groups.

“Despite persistent efforts by some states and the federal government to roll back hard-won protections, cities are boldly and courageously pioneering the path forward on LGBT equality,” said Xavier Persad, legal counsel for the Human Rights Campaign and author of the Municipal Equality Index, that rated 506 cities on inclusive protections and policies.

Last year, 68 cities attained the highest ranking, compared with just 11 the first year of the index in 2012.

Strides made by municipalities in welcoming LGBT residents and visitors are significant but not unexpected, Persad said. “Local leaders are most closely acquainted with the people their decisions impact. They are their friends, neighbours and family members,” he said. “City officials are less mired in the political dynamics that too often determine outcomes on higher levels of government,” he added.

The report comes in a year that LGBT activists have to struggle to preserve the last fragile victories and fend off new challenges at the state and federal level with Trump's Administration.

Some highlights from report: