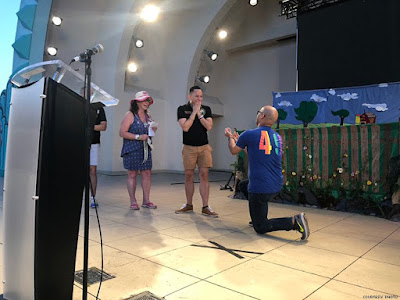 Carlos Guillermo Smith, a Democrat State Rep. from Florida and one of the most prominent LGBT leader, was surprised by longtime partner Jerick Mediavilla who asked him to marry, at Orlando Pride. Obviously, he accepted.

The romantic moment took place onstage at the Walt Disney Amphitheater, a structure painted in rainbow in honor of the victims of the Pulse shooting in 2016.

Jerick had been planning to pop the question for about six months. He said sharing the moment at Orlando Pride made it even more special because the community is the first where he’s felt fully accepted. "From the beginning, people here celebrate diversity even undergoing adversity, and for the first time in my now 37 years, I feel free to love openly and have an entire city celebrate that love I grew up hiding to avoid offending people."

Carlos Guillermo declared: "I spent my whole life being told I wasn’t allowed to marry. That my love would not be recognized and was something to be ashamed of. Finally having the freedom to marry the man of my dreams and have our love celebrated by so many sends a powerful message to LGBT youth, you can grow up to be exactly who you want to be, be happy, and maybe even run for public office someday.”

He first won election to the House in 2016. As Florida’s first gay Latino lawmaker, and one representing the Orlando area, he regularly has invoked the memory of the 49 innocent victims slain at the gay nightclub, whether pushing for an assault weapons ban or fighting for antidiscrimination protections for LGBT workers. 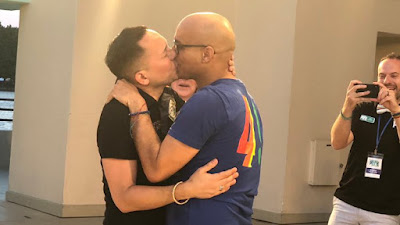 Congratulations to the couple!!!