Parents of trans children send a letter to Trump 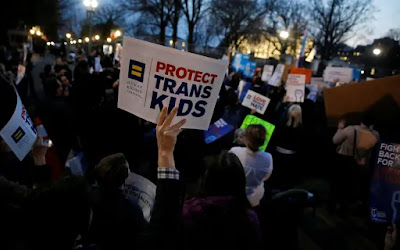 Earlier this week, a leaked memo from the Trump Administration revealed intentions to erase transgender people, considering narrowly defining gender as a biological, immutable condition determined by genitalia at birth,

More than 1,500 parents of transgender children in the US signed and sent a letter to the Trump administration. Addressed to Donald Trump and his Vice President, Mike Pence, the parents say:

We are the parents of transgender children from across the United States, representing various races and ethnicities, socioeconomic backgrounds, and faith communities.

We write to expressour outrage and deep concern over the Trump-Pence Administration’s proposal to legally define sex as either male or female, unchangeable and based on unscientifically narrow criteria.

This is the latest cruel attempt in a long line of attacks to diminish the existence and humanity of our children and to dismantle their basic human and civil rights. We want to make this very clear — when our children are under attack, we will fight like hell to protect them.

We fear every day that our children will encounter bullies — but we never imagined that the most threatening bullies would be in the White House. It is your role to protect our children, not to erase them from civil rights laws.

We will vote to restore decency and compassion to our Congress and to our national leadership. We will vote to secure a nation in which our children can live fully, freely, to their greatest potential.

We will vote to save lives — the lives of our children, all transgender and nonbinary people, and all vulnerable communities in our nation who your Administration views as secondary and disposable.

You can read the letter here.