Over one million same-sex households are censed in U.S.

According to estimates from the 2019 Current Population Survey, there are 543,000 same-sex married couple households and 469,000 households with same-sex unmarried partners living together in the U.S.. In addition, 191,000 children live with same-sex parent.

Census promised to collect more information about same-sex couples and LGBT people in general, but they will not ask census takers this year about their sexual orientation. In fact, they have historically mishandled or hidden data related to non-heterosexual people.

Under the Obama Administration, multiple government branches began working together to make it possible to add questions related to sexual orientation and gender identity, but that has stopped under Trump, which would further diminish the accuracy of the census and further harm LGBT people.

That means the actual data that the U.S. Census has a long history of not collecting will continue to go unknown because Trump, preventing people from knowing information that could prove vital to LGBT people’s advancement in society. 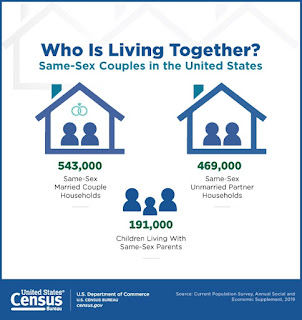