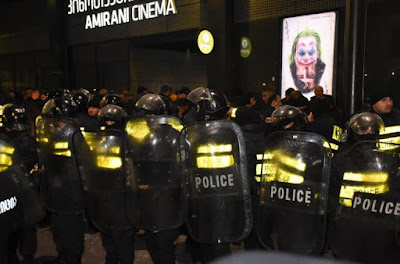 Anti-LGBT demonstrators rallied in Tbilisi, capital of the nation of Georgia, to protest the opening of a gay-themed movie.

Hundreds of people, some holding crosses or other religious icons, blocked a road leading to the theater showing And Then We Danced, a film about a love affair between two young male Georgian ballet dancers. The film premiered at the Cannes Film Festival in May and was well-received there and at other festivals.

But Georgia’s Orthodox Church and other homophobic forces in the conservative nation have condemned it and said it promotes sin. Some burned a Pride flag, while others threw smoke bombs and firecrackers in the direction of the theater or tried to force their way in. Riot police stopped them from entering the venue.

Police arrested 12 demonstrators. One of them had thrown a stone that hit a young woman who was trying to see the movie; she was taken from the scene by ambulance. The other arrestees had sought to force their way into the theater.

The film’s director, Levan Akin, denounced the violence in a social media post. “It is absurd that people who bought tickets need to be brave and risk getting harassed or even assaulted just for going to see a film,” said Akin, who was born in Sweden but is of Georgian descent.

Georgia’s Interior Ministry urged everyone to follow the law and avoid conflict, and said the protests did not lead to cancellation of the screenings. “All movie shows scheduled for today in Tbilisi have started and are under way,” said a statement issued by the ministry.

Watch the movie's trailer below: