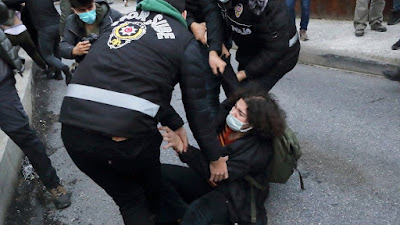 The European Union (EU) decried the detention of university students in Turkey and the use of anti-LGBT “hate speech” after President Recep Tayyip Erdoğan lashed out at youth-driven protests.

More than 300 students and their supporters were detained in İstanbul and the capital Ankara in increasingly violent and politically-charged altercations with the police this week.

The protests first erupted after Erdoğan named a party loyalist as head of Boğaziçi University at the start of the year. Students saw this appointment as part of Erdoğan’s broader effort to centralise control over Turks’ daily lives.

Lead Spokesperson for Foreign Affairs and Security Policy Peter Stano issued a statement on the detentions of students and developments around Boğaziçi university.

Stano said the "European Union is seriously concerned over the negative developments in Turkey in the areas of the rule of law, human rights and the judiciary," and added that "the COVID-19 pandemic cannot be used as a means to silence critical voices. Hate speech displayed by high-level officials against LGBT students during these events and the closing of a LGBT association is unacceptable.

Stanno continued: "The detention of more than a hundred students exercising their legitimate right to freedom of assembly as well as the Istanbul governor’s decision to ban all kinds of meetings, demonstrations and marches in two districts covering the hinterland of the Boğaziçi university is a deeply worrying development, and goes against the authorities’ stated commitment to reforms towards EU values and standards."

Stano called "on Turkey to respect its national and international obligations and to release those arbitrarily detained for exercising their right to peaceful assembly over the last weeks. The excessive use of force by the police against people using their right to freedom of opinion is contradictory to Turkey’s obligations as a candidate country and long-standing member of the Council of Europe."

The United States has also condemned the detentions and anti-LGBT rhetoric. 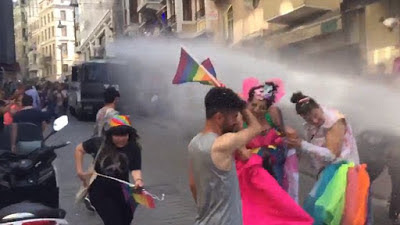