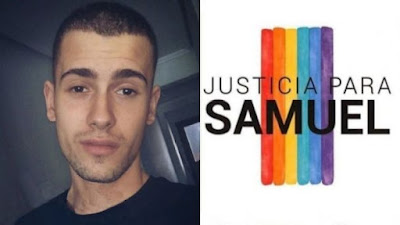 Young gay man, Samuel Luiz, was brutally beaten to death by a dozen men at A Coruña, Spain, in a suspected homophobic killing.

Samuel, a 24-year-old nursing assistant described by pals as a loving man who always wanted to make people laugh, was killed outside a nightclub in the bustling port town of the Galician city.

At around 3am on Saturday (3 July) during Pride weekend, Samuel and his friend Lina stood outside a local nightclub and began FaceTiming a friend. A man then approached him and said: “Stop filming me or I’ll kill you, fa**ot.”

But before Samuel could even reply, the man set upon him and Lina watched helplessly as the man beat him: “The man punched him very hard and Samuel began to scream,” she told.

Some civilians stepped in to help Samuel during the brawl, managing to push his attacker away. But, the man returned with 12-strong men who fatally injured him. They left Samuel unconscious on the ground and did run away. Emergency services struggled to save Samuel for two hours, dying later that early morning of his injuries at hospital.

LGBT groups across Spain arranged street demonstrations to call for justice for Samuel. In the Spanish capital, Madrid, thousands of people took the central Puerta del Sol square, and there were also crowded protests in multitude of cities.

Activists were warning that attacks on LGBT people increased in Spain in recent times, but this is intolerable, enough is enough! 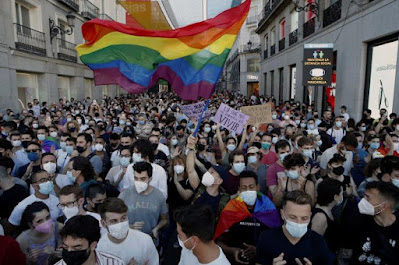 Thousands demonstrated around Spain against this killing
#JusticiaPorSamuel