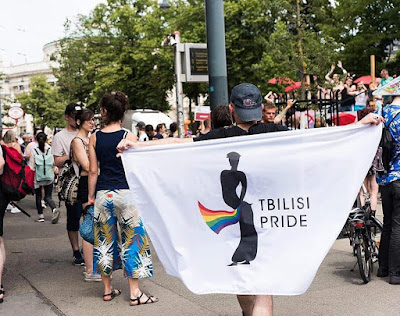 LGBT activists in Georgia have cancelled a Pride march in the capital Tbilisi after violent clashes ahead of the parade.

Violent groups stormed and ransacked the office of gay rights campaigners. Activists posted photos and videos of people breaking into the premises and some journalists had reported that their equipment was broken in the attack.

After scuffles between anti-LGBT groups and the police, the organisers of the 2021 Pride said they would be cancelling the event because the authorities could not ensure the security of the community and supporters.

Organisers said they had been actively communicating with the Georgian Ministry of Internal Affairs about security ahead of the march. They declared: "The actions of the government have clearly shown that they don't want to perform its direct duty. The inaction of the executive power has put the health and lives of Georgian citizens in real danger."

The country remains under the influence of the powerful Orthodox Church, which has been a vocal critic of governments deemed too progressive. Campaigners also called on the international community to oppose "radical groups" and pro-Russian anti-LGBT voices in Georgia.

Prime Minister Irakli Garibashvili himself had spoken out against the event, saying that holding a Pride March is "not reasonable" and would create "the threat of civil confrontation". Organisers of the event have described the Prime Minister's comments as "shameful".

Russia, Poland, Hungary... now Georgia... where are the European values?

Watch some of the violents attacks in Tiblisi against LGBT activists and journalists: