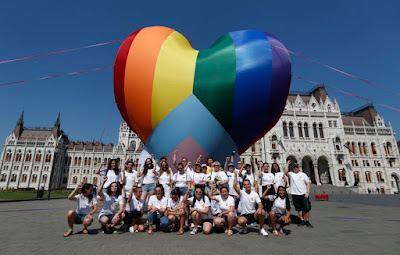 Activists have erected a giant rainbow coloured heart outside Hungary’s parliament to protest against the country’s anti-LGBT law.

Hungary’s anti-LGBT law came into effect on 8 July, following weeks of international backlash. The law has been labelled ‘a disgrace’ and will serve as “a breeding ground for attacks, intimidation and self-censorship” in Hungary.

European Commission president Ursula von der Leyen called on MEPs to condemn the country’s shameful law in the strongest possible terms. “Homosexuality is equated with pornography,” she said. “This legislation uses the protection of children […] to discriminate against people because of their sexual orientation. It is a disgrace,” she added.

Just one day after the bill went into effect, European Parliament lawmakers voted 459-147 with 58 absentations for a resolution that sent a clear signal that the bloc “condemns in the strongest possible terms” the anti-LGBT law.

MEPs described the law as being a “clear breach of EU values, principles and law”, referring to those enshrined by the EU Charter of fundamental rights, the Treaties and EU internal market legislation.

The European Parliament has also warned that Hungary could face legal consequences if it continues down its anti-LGBT path. The parliament is reportedly considering inviting individual countries to sue Hungary over the law, which has been widely compared to Russia’s “gay propaganda” law. 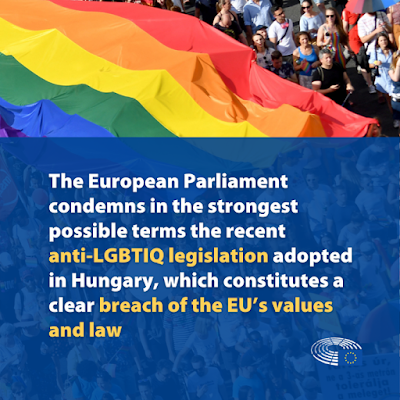