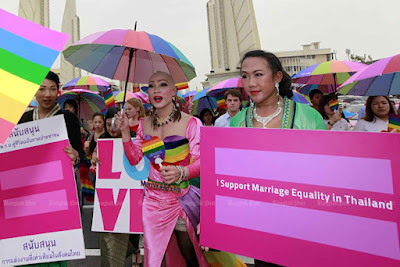 The Foundation for Sexual Orientation and Gender Identity Rights and Justice, a Thai advocacy group, filed a lawsuit that challenged Section 1448 of the country’s Civil and Commercial Code, which does not extend marriage rights to same-sex couples.

The Constitutional Court has ruled that Section 1448 of the Civil and Commercial Code, which only allows for a man and a woman to register their marriage, is not against people's constitutional rights, marking a blow for proponents of same-sex marriages.

The judges made clear they believed a legislative remedy was required with a positive statement suggesting lawmakers enact laws that “ensure” equal rights for all regardless of sexual orientation and gender identity.

The ruling comes despite Thailand’s reputation as a ‘gay paradise’ and despite widespread recognition of the rights of the gay community by Thai society at large. Besides, Thailand actively promote the country as an LGBTQ friendly nation. The Tourism Authority of Thailand even launched a website for their Go Thai Be Free campaign to reach out to LGBTQ travelers.

Before the constitutional court’s verdict, Thailand also approved a draft bill that would legalise same-sex civil partnerships. The Civil Partnership Bill avoids the term “marriage” but would allow same-sex couples the right to jointly own property, adopt children and pass on inheritances. It would be a first in any Southeast Asian country if passed into law.

It's time to come out, Thailand!!