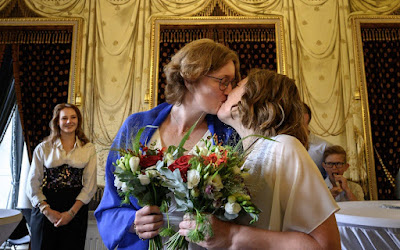 A law allowing same-sex couples to marry came into force in Switzerland, it also provides these couples with new rights in relation to adoption and artificial insemination.

The law was approved by an almost two-thirds majority of voters in a referendum last September, although participation in the vote was not very high, according to Swiss media.

Since 2007, same-sex couples have been able to enter into a registered partnership in Switzerland, however, marriage will bring them new rights. For example, they will be able to adopt a child, and if one spouse is a foreign national, they will be able to acquire Swiss citizenship more quickly; same-sex female couples will also have greater access to artificial insemination.

Switzerland is one of the last countries in western Europe to allow same-sex marriage. Hundreds of couples throughout Switzerland will transform their registered partnership into a marriage in the next few weeks.

One of the first homosexual couples were married by the mayor of Geneva, Marie Barbey-Chappuis, who supports the new law. “It’s very moving. It’s a very powerful moment that sends an equally powerful message to society, to have the freedom to love and be loved,” the mayor said.