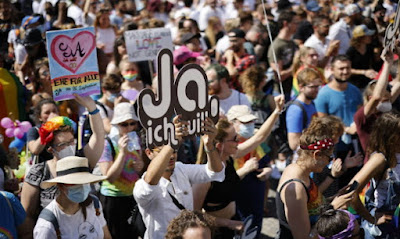 Tens of thousands protested in Switzerland for the legalization of same-sex marriage in the country. They participated in the Zurich Pride parade with the slogan “You can do it. Marriage for everyone now.”

On September 26, Switzerland will hold a referendum on whether to push ahead with same-sex marriage. If a majority votes for the legalization of same-sex marriage, this would also allow couple to adopt children. In addition, lesbian couples would have easier access to sperm donations if they wanted to start a family and it would be easier for foreign partners to get Swiss citizenship.

The parliamentary work on this project lasted seven years. It was launched in 2013 by a parliamentary initiative from the centrist Liberal Green Party. Several versions of the text were debated by lawmakers before parliament in December 2020 accepted an amendment to the civil code to legalise marriage between two women or two men.

So far, same-sex couples in Switzerland can only get official approval for civil unions, which are not on equal footing as marriages. Switzerland is one of the four countries in Western Europe that bans marriage for homosexuals, along with Italy, Greece and Liechtenstein. 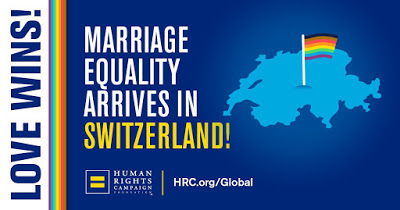